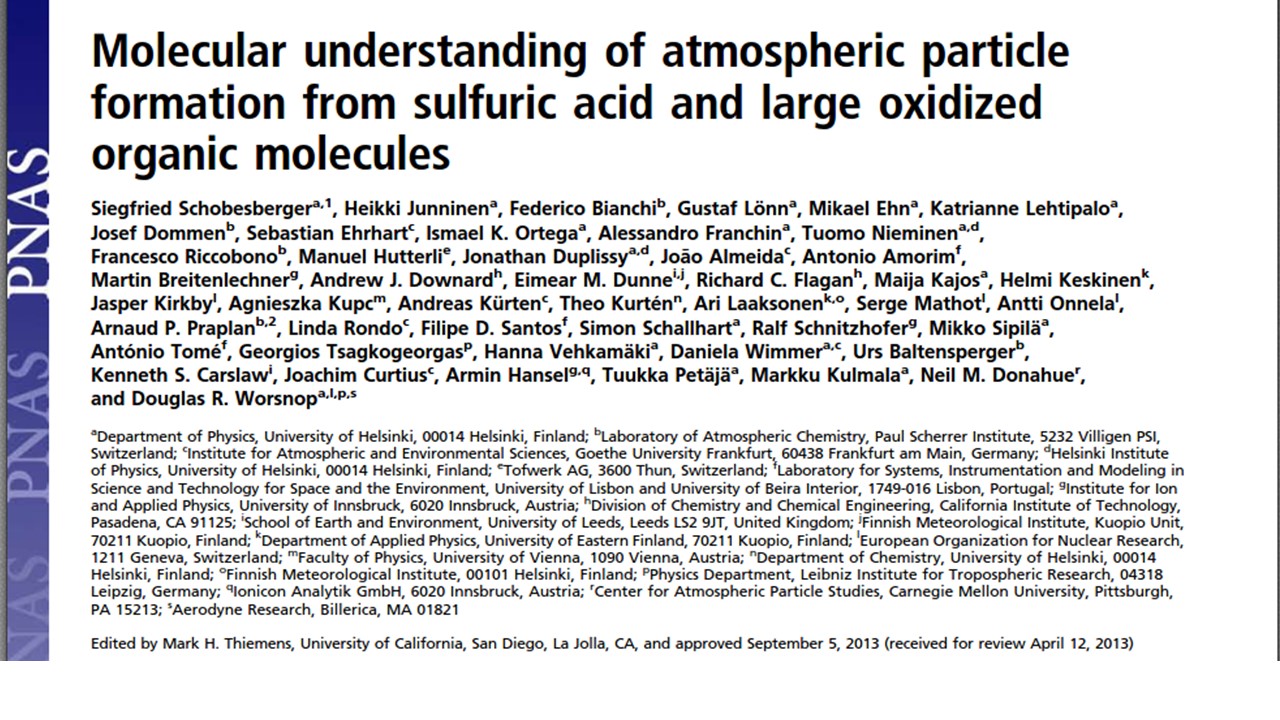 The background to the CERN CLOUD experiment. CLOUD is tackling one of the most challenging and long-standing problems in atmospheric science – to understand how aerosol particles are formed in the atmosphere and the effect these particles have on climate. These particles cool the climate by reflecting sunlight and by forming smaller but more numerous cloud droplets, making clouds brighter and extending their lifetimes. The increased amount of aerosol in the atmosphere caused by human activities has compensated for a large fraction of the warming caused by greenhouse gases. By current estimates, about half of all cloud drops are formed on particles that were “nucleated” (that is, produced from the clustering of atmospheric molecules with tiny concentrations rather than being emitted directly into the atmosphere, like sea-spray and combustion particles). It is still not known which molecules control the very earliest stages of particle formation and growth, nor whether they have human or natural sources.

What has been studied and discovered? CLOUD has studied the formation of particles in a specially designed chamber under extremely well controlled laboratory conditions of temperature, humidity and concentrations of nucleating vapors. We measured the formation of particles caused by clustering of sulfuric acid and gas-phase oxidation products of a compound – pinanediol – that is itself an oxidation product of α-pinene.  α-Pinene and other terpenes are emitted copiously from trees and other vegetation, whilst sulfuric acid is formed largely from human emissions, especially combustion of coal and oil.  With oxidation conditions closely matching those in the atmosphere, we found that sulfuric acid forms clusters with oxidized organic compounds, and that those organic compounds rapidly reach a surprisingly high degree of oxidation. Using state-of-the-art high-resolution mass spectrometers, we were able to watch the clusters grow molecule by molecule until they reached a size large enough to be a stable particle. The composition of the growing molecular clusters observed in these experiments resemble mass spectral observations at the boreal forest research station in Hyytiälä, Finland, where the atmospheric physics research group (lead authors on this paper) have been conducting new-particle formation measurements for the past two decades.

What’s special about the CLOUD experiment? With CERN expertise, the CLOUD chamber has achieved much lower concentrations of contaminants than all previous experiments, allowing us to measure nucleation due to controlled amounts of selected trace gases without the complicating effect of unwanted gases. The CLOUD consortium includes experts in aerosol physics, aerosol chemistry, quantum chemistry, and global climate modeling as well as industrial partners developing state-of-the-art instrumentation. Cutting-edge mass spectrometers developed collaboratively by University of Helsinki in Finland, Aerodyne Research in the US and Tofwerk in Switzerland enable precise determination of the molecular composition of clusters containing dozens of different types of oxidized organic compounds in various combinations with sulfuric acid. The combination of technical expertise, collaborative team members and cutting edge instrumentation forms a consortium with unparalleled capabilities.

What did the University of Helsinki contribute? Researchers from the Department of Physic’s Division of Atmospheric Sciences contributed to running the experiments at CERN, together with the other collaborating institutes. The Helsinki team was responsible for measuring ions, molecular clusters, and the smallest newly formed particles. State-of-the-art ion mass spectrometers allowed us to reveal the composition of the molecular clusters that form at the beginning of new-particle formation. In addition, results were used from observations of new-particle formation in the actual atmosphere. These observations were made at the SMEAR II station in Hyytiälä, Finland, where the Division of Atmospheric Sciences has been doing comprehensive measurements on the atmosphere since 1994.